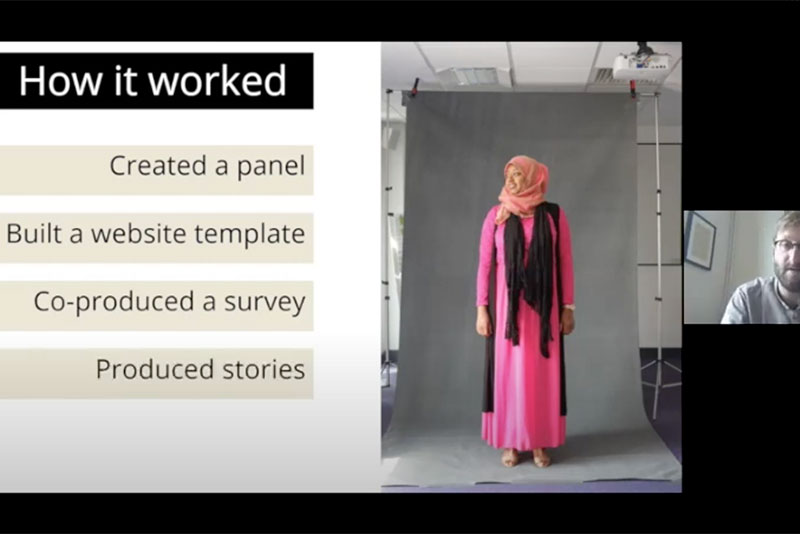 Iona Keen gives an overview of this recent Spotlight Talk.

After a 5-month break during lockdown, the Bristol Culture and Heritage Mingles were relaunched on Monday 17 August. Continued restrictions mean that we are not yet able to host the Mingles indoors in person, so we have gone digital.
Our first online Spotlight Talk, which was originally scheduled to take place in person in May, focused on the Bristol Black History project. In the wake of the toppling of the Edward Colston statue by Black Lives Matter protestors in June, the new timing of the talk couldn’t have been better. Going digital also meant that we were able to extend our reach and invite participants from outside Bristol and the local area. The talk was hosted on Zoom, which the South West Fed were able to purchase with a grant from Arts Council England thanks to funding from the National Lottery. Participants were kept on mute and Iona fielded questions at the end via the Zoom chat function.
The talk was hugely popular with more than 50 people attending from across the country. We had representatives from the Natural History Museum, the Wellcome Collection, Kew Gardens, English Heritage, the National Trust and the University of the West of England, among many others.
I gave a short introduction to the Bristol Mingles and the South West Fed, for the benefit of people from outside the South West, before handing over to Finn White, Engagement Officer (Communities) at Bristol Culture. Bristol Culture and Creative Industries operates five museums and the city’s archives, and cares for nearly 2 million objects covering a wide range of disciplines. The service works in partnership with communities across the city and runs an active learning programme.
Finn’s talk, entitled Giving up the power: Producing community-driven content, focused on the Bristol Black History project, which was launched in late 2018. The project was a collaboration between the communities team and the digital department. It all stemmed from the need to address a problem – the lack of narratives around Bristol’s black history, on site and online. Various black community partners in Bristol had commented that the service’s content wasn’t representative and people didn’t feel like their stories were told at the museums and therefore didn’t visit, perhaps because they felt that this history had been ‘whitewashed’. There was also huge online demand for content relating to Bristol’s black history, such as the bus boycott and the Transatlantic slave trade. The service acknowledged that their in-house teams were not representative of the communities whose stories they wanted to tell. They were keen to try out a new way of working involving letting go of their control over the museums’ narratives and devolving this power.
The project set out to address these issues, starting by creating a steering group of internal and external experts of black Bristolians, both historians and activists. On the digital side, the team commissioned a web developer to build a template for a website which could be easily updated in-house. They co-produced an online survey to find out what the public wanted to know about Bristol’s black history, what they understood by black history, and whether they identified as black. This provided the data about which types of stories to research further.
Writers were commissioned to write the stories, which were checked by the panel and then tested for readability. This is important not only for accessibility but also to enable search engines to find the stories easily.
Impact of the project:
Finn ended by saying the he hopes this project heralds the start of a process of institutional change. There is a need to diversify the service’s permanent staff and to give communities more ownership of the museums and the stories they tell.
Key learning points:
Iona Keen is a freelance Heritage Consultant and trustee of the South West Fed. On the board she acts as the Bristol rep and in her role organises monthly meetings – Culture and Heritage Mingles – for people working in the sector to network, hear about recent projects in the area, and showcase their work. Follow us on Twitter and join the group on Facebook:
@BristolMingle
https://m.facebook.com/groups/195864957816940
Or alternatively email bristolmingle@gmail.com to sign up to the monthly newsletter.