Top Image: Weapons originally belonging to the Wellcome Historical Medical Museum laid out in the Duveen Gallery at the British Museum, 1955.  Wellcome Collection.

Helen Daniels, Trustee of the South West Fed responds to James Peto’s talk. The second in our series: New Directions in a Changing World

In a week when debate raged about Government interference in deciding how contested heritage should be presented and what stories from our past museums should seek to tell, it was particularly pertinent and refreshing to listen to this talk by James Peto about the issues, challenges, opportunities and evolution of the vast, fascinating and sometimes problematic Wellcome Collection.

There was a large turnout for the event, the second of the South West Fed’s programme of monthly talks, which facilitated a range of interesting questions to James and lively discussion during and after the session.

James’s talk introduced us to the history of the collection and collector, some key ‘contentious’ objects and the approaches Wellcome Collection is taking through its research, interpretation, consultation and collaboration in order to sensitively present displays and programmes that fairly represent all communities whilst continuing to prompt curiosity about science, medicine, life and art.

Victorian entrepreneur and philanthropist Sir Henry Wellcome made his fortune in the pharmaceutical business.  He wanted to better understand and demonstrate the evolutionary processes of healing, living and dying.  He and his agents collected millions of objects, artworks and manuscripts from around the world.  His wealth and legacy established one of the largest health charities in the world, the Wellcome Trust.  Wellcome’s collection has been extensively displayed in other museums, including the Science Museum and British Museum, but the dedicated public museum is relatively new, having only opened its doors in 2007. 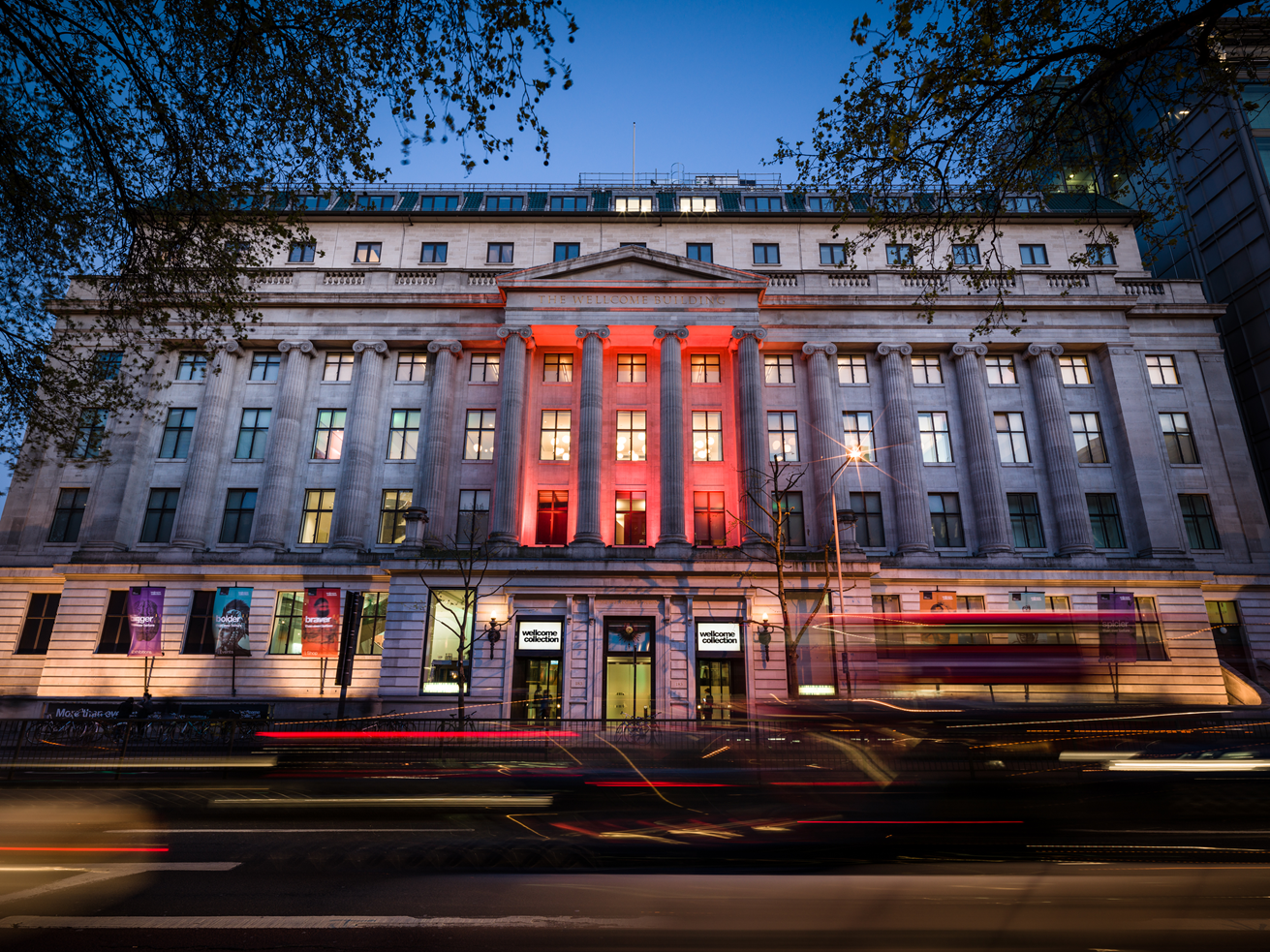 Wellcome’s private collection was one of the largest in Europe at the time of his death in 1936.  Following his death millions of items were distributed to museums in the UK and around the world.  James showed a map of the global reach of this exercise and listed six institutions just here in the South West which had received material.

The Wellcome Collection team is very upfront about the uncomfortable discrepancy between the European Superiority attitudes at the time when the collection was amassed, and how medicine and the differences between peoples are viewed today.  They very much accept and admit that addressing these inequalities is a work in progress.  The Wellcome Collection’s statement on anti-Blackness and racism is prominently linked on the museum’s homepage, wellcomecollection.org.

In 2018 the museum embarked on a series of initiatives to challenge and change the way the collections are used.  A big step involved re-interpretation in the galleries by replacing ‘Medicine Now’ with the ‘Being Human’ exhibition.  This transition continues in the planning of the new permanent exhibition which moves away from a Henry Wellcome collector-focused approach to a gallery which will continuously represent a wide range of perspectives, voices and creative interventions based on new, collaborative research. There will be a particular emphasis on working with racially minoritized groups and with, deaf, disabled and neuro-divergent people. 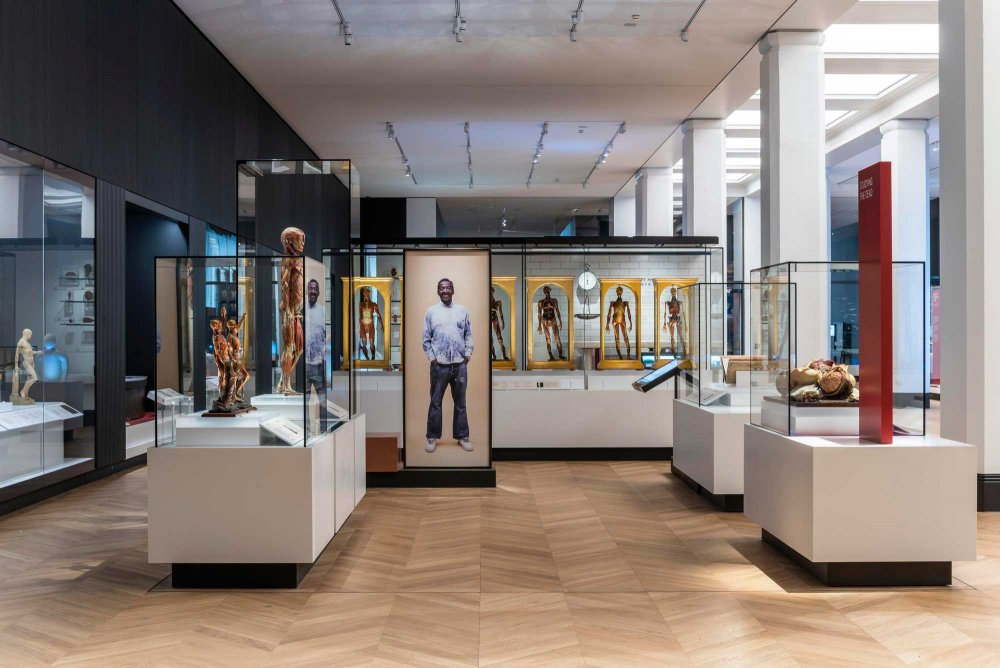 Touching on museum operations from cataloguing to display to research and engagement projects, James talked about

the importance of ensuring culturally sensitive principles and protocols are applied to all of your everyday practices – that to simply talk of ‘decolonisation’ suggests that this is a project that can be completed or signed-off.

James reminded us that

it is only by embracing the inequities represented in our collections and histories that we can bring about real change, and represent the lived experiences of those whose stories have previously been silenced, erased or ignored.

A dedicated member of staff is working her way through the collection to identify objects with particular cultural sensitivities, whether because they contain human remains or because they are believed to be invested with spiritual properties.  In such cases contact will be made with source communities in order to decide on the appropriate course of action.  James said they have much to learn from heritage colleagues in other countries especially Australia, New Zealand and Canada where strategies for consultation, reconciliation and restitution are more advanced than they are in Europe, thanks largely to closer relationships with indigenous communities.

James presented examples of objects in the collection that demonstrate issues, actions taken and the continuing processes the museum is undertaking.  These include a decorative hanging from a temple at Puri in eastern India, a precious sacred artwork which formed part of a wider haul which appears to have been acquired through the exploitation of the owner.

Another interesting case study concerns the removal from display of the naturally mummified body of a man, who had been incorrectly documented as being from Peru.  The body had been squeezed into a display case completely disconnected from the man’s story, ethnic heritage and culture.  Research continues to trace the origin of the mummy and to consider ethically sound and culturally appropriate next steps.  In the meantime, the case has been kept empty, accompanied by a text which explains why it felt right to remove him from display and to outline the museum’s future intentions towards him. 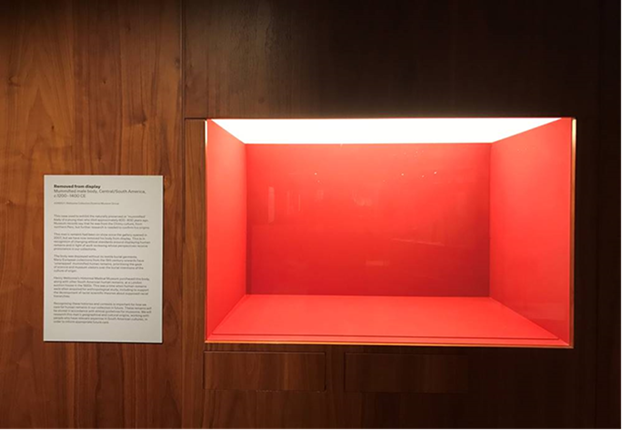 The issue of who can speak with authenticity about an object was raised during an investigative experiment by the anthropologist Paul Basu into an artefact recorded as a Nigerian medicine man’s ‘amulet’ made from antelope horn with a human jawbone attached. An image and details were posted on the page of a Nigeria Nostalgia Facebook group with an appeal for information.  Eight pages worth of varied and conflicting comments were received.  The object will be re-displayed incorporating some of the opinions collected as well as what little is known about the provenance of the object.  Transparency is key as some complex objects will always elicit debate.

James praised the role of Wellcome’s Visitor Experience team for being the ‘ears and voices’ of the museum.  VE staff are diligent in collecting and recording the conversations, reactions and problems of visitors and relaying these back to the curatorial team.  This information can then feed into decision-making about current and future displays.

Closure during lockdown has given the wider team time to focus on researching, digitising and writing about the collections.

James stresses the importance of preparing and supporting people for what they might encounter when delving into documentation and old display labels.  The language used can be outdated, racist, ableist, distressing or offensive. At the same time guidance is provided to help team-members become comfortable and confident with the language they use.  In doing this the language of the past and former evidence of discrimination is not being erased but decisions are made about where and how best to store it in the records.

On advice to smaller collections and museums on how to bring about change James was honest and reassuring.

Know that you will get things wrong and be open to criticism; expect awkward conversations; be bold; be confident; apply the standards and language of today and don’t be afraid to say if something is racist even if that would not have been a consideration at the time when the object was first collected, catalogued or displayed.

James’s stimulating talk has given us all food for thought about the history of collecting and how we can ensure the stories we present are culturally and ethically acceptable and relevant to today’s audiences.

To explore this subject, and for further guidance about applying these principles to collections, sites and operations, the Museums Association’s website has a wealth of newly-published articles, examples and research: https://www.museumsassociation.org/campaigns/decolonising-museums/resources/

Sharon Heal, Director of the Museums Association, will be one of the speakers at our next ‘New Directions’ event on 25 March.  Booking is now open https://swfed.org.uk/online-creative-programme/.  We hope to see you there!